I’ll admit it was inane, but I insisted on finding a bookstore in order to find a common Japanese phrase book, so we found one before heading off anywhere else. Turns out, Japanese bookstores don’t sell those. They do have books for learning other languages though, including a lot of neat Chinese-Japanese books, an appropriate souvineur for this trip. At the bookstore, I attempted to ask for help finding books and happened to ask the right lady, who also spoke some Chinese (not that common in Japan). Score! At that point, I was very glad to be able to communicate in both English and Chinese. 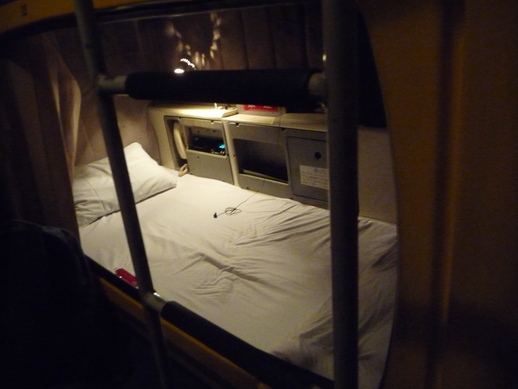 I found us a capsule hotel for the night, which was going to be super exciting because I was looking forward to attempting to communicate with the hotel counter person with Japanese translations that I copied down from Google Translate. To my disappointment but perhaps for the better, we stayed in a pretty touristy area of Tokyo, so the hotel counter people all spoke a bit of English. The hotel experience was great though. We stayed in a “capsule dorm,” a room of 8 capsules and 8 lockers. The capsules reminded me of kennels that pet owners use to store and transport their dog. It was roughly the same shape and make, but person-sized. There was a curtain on the side that you could push aside and crawl in. The capsule is exactly enough room for 1 standard-sized Asian with some additional room to roll around, and it came equipped with a lamp, alarm clock, radio, TV, etc. The efficient space utilization was cool to see.

We explored Akihabara, Japan’s place of plentiful anime, manga, video games, arcades, and electronics. I feel like this is a true blend of technology and art, mixed with a hint of culture and youthfulness. It was a neat to see an oscilliscope store. But after the SEG and Minghe electronics markets, the component shops (and their high prices) were underwhelming. The arcades, on the otherhand, thriving. We walked through a 4-story building full of arcade machines, bustling with intense arcaders.