Magically, we got on standby to the flight from Beijing to Tokyo. Earlier, they told us it was pretty much impossible because they switched out the normal plane with a smaller one and were thus having weight issues. The Seattle flight looked terrible too (as collateral damage). But magically, everything worked out. At this point in our trip, Julian took a gamble, split off, and stayed at the airport for the flight to Seattle, so that he could get back to familiar lands and hopefully recover better. Here, aside from anti-diahrrea medicine, we could only offer him old bagels from Seattle, some ginger tea from Boston (but probably China before that), and local Chinese herbal medicine. In retrospect, I might have been able to fly directly to Seattle as well, so I’d have a few days at home before headed back to school. Ah, well. The way to go when flying standby is to simply get on the first flight that you can. Among friends, I’m OK with the uncertainty.

I normally have a lot of trouble sleeping on moving things — cars, trains, subways, planes — but this trip has been exhausting enough that it’s been a piece of cake to sleep in these settings. Nancy claims that she’s taught me well. xD But I’m still not a pro like she is. During this trip, I found that sleeping with earplugs and pulling my new navy beanie over my eyes works like a charm in blocking out most noise and light.

We arrived in Tokyo, land of not only fancy toilets but also plentiful vending machines. They vend warm soups! And their toilets are fancy even in non-fancy places, and their fanciness varies. I’ve seen toilets with sinks attached that trigger upon flush so that guests can leave the bathroom untouched. I’ve seen toilets with special pepperminty spray things for cleaning the toilet seat and your hands. Of course there is the standard fancy toilet that squirts water to clean your butt and makes flushing noises to block out unwanted noises. Some toilets also have wonderful butt warmers. Not all toilets are created equal, and not all toilets are fancy. There are also non-fancy sitting toilets and squat toilets. I guess when you are building up a new building, you get to specify a lot more about your toilets in Japan than in most other places. 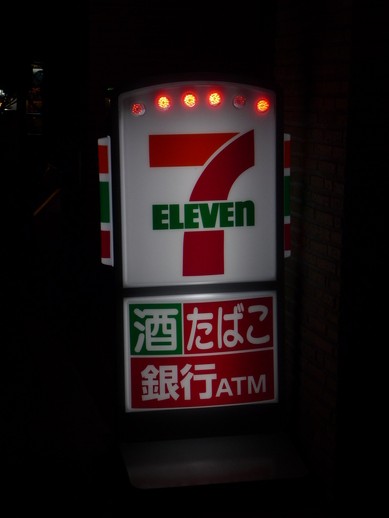 It’s clear that the Japanese are committed to overdesign. The subway was super smooth, though I can’t tell / can’t recall how different it is from the metro in Taipei. We visited a 7-11 in Tokyo (1 of 12,000 or so) and again, the selection far far exceeds that of 7-11s in the US. As compared to those in Taipei though, they are comparable. Maybe I just have very mundane interests, but I feel like it would be fun to tour the world checking out all the various subway systems and convenience stores. Of course, I have always found it fascinating to watch cars go by..
If Taiwan was preparation for China, then China was preparation for Japan, which has the least English support out of the three countries. Not knowing more than 20 words of the language, what saved us (aside from normal body gestures and looking absolutely clueless) was being able to read some of the Kanji (some are directly mapped to Chinese characters). On the subway, we also bumped into a couple speaking Chinese, and they helped us get to where we needed to go.
The Tokyo Hackerspace was perhaps what I’ve been looking for (without knowing it). We had the opportunity to attend their regular weekly meeting that evening. It was the first meeting of the new year and a lot of people were still away, so the attendance was slim (~10 throughout this evening, but normally on the order of 40 people), but I got the sense that they were really a community. They were all friends; they talked about technical things, but they also joked and talked about non-technical things. They were friendly, not at all exclusive. The emphasis, again, was on hardware, but I’m learning that computer vision is actually something of interest to hardware people. There was calming nature-y music in the background and the atmosphere was perfect, complete with tiramisu, and all I wanted to do was start a hackerspace in my dorm room. It’s the sense of community that has made MIT so awesome for me, but I’m here to learn, so what I want to see is a technical community at MIT, especially among undergraduates. Moar reading groups!
It was here that Josh and Nancy got their wish of crashing at a hackerspace.
And the fun fact for the day is that the Tokyo Hackerspace is comprised almost entirely of expats (who all speak English). Apparently, the Japanese aren’t accustomed to the idea of technical community either. We learned about a separate 4-member hackerspace in Japan that comprised of Japanese members but was closed to membership.