The Copenhagen Post reports that 2014 set records for the number of cars on Danish roads. Maybe Blondie here (not to mention his friend Miss Paraguay) will change some minds—though hopefully not via Molotov cocktails.

via The Best Public Transportation Advertisement Ever? – CityLab.

I don’t know what they’re saying, but this is awesome. 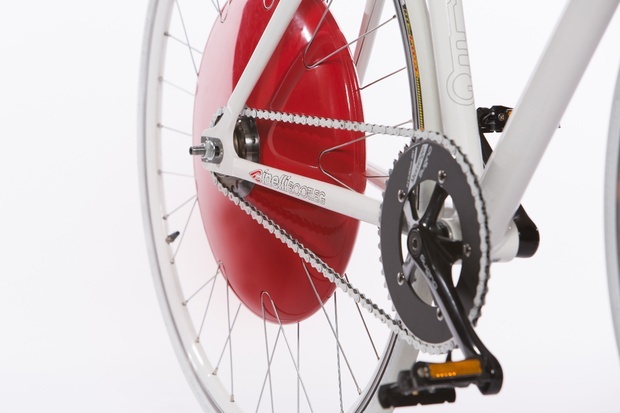 A ton of stuff has happened this year!

via The Biggest Transportation Breakthroughs of 2014 – CityLab.

One day behind. We’re on our way to China now, the land of the Great Firewall. The plane should be landing in Shenzhen (深圳) soon.  To be honest, I’m nervous… and cautiously super excited, if that makes sense.  I’ve been told for the last several weeks how much of a mess China is around this time of year (migrant workers, pollution, food and water safety), especially Shenzhen.

Julian didn’t join us for our adventuring on Saturday due to his architecture paper (from this past semester), but it sounds like he’s almost done so that hopefully won’t ruin any more fun for his trip. We started the day off by making our way through the Taipei Metro subway system.  The subway system is actually amazing, the best I’ve seen yet; everything is super clean and orderly. No food is allowed, and indeed, I never saw any food in the stations. The escalator has a sign that tells people to hold the handrail, and indeed all the way up, everyone was holding the handrail. The other amazing thing is that there are marked queues on the platform for entering the train, and people line up along them waiting for the train. Sometimes, the lines are so long that they extend down the platform to the next line / train door, but even when it is boarding time and there is another opening nearer to someone, the people still follow the queue they are in! No one seems to be particularly in a hurry, and everyone is amazingly friendly. Once, we got off a train and only looked around for about 3 seconds before an employee came over to ask us where we wanted to go.

The trains are beautiful too, and some lines have trains that don’t have doors between cars. I can’t comment much on the train engineering, but the stations and station maps are extremely well designed. Everything is intuitive and labeled well. After taking the subway just 1 stop the day before with Peter and Jessica, I felt like there was absolutely no problem navigating the subway system, even with only a vague grasp of the language. On the contrary, Boston’s MBTA took a bit of getting use to (inbound, outbound), and NYC’s MTA is still too much for me. Some of the bathrooms even have panels that indicate occupancy.

Later, we even visited the (or just one of?) Taipei Metro gift shop! They have a gift shop for their subway system! I appreciate their value of public transportation.

Anyway, we met up with Peter and Jessica again and had wonderful Shaobing (烧饼) and rice milk (米浆) for breakfast, followed by a visit to Long San Temple (龙山寺), a beautiful Daoist temple for Guanyin (观音), goddess of mercy. It’s about half tourists, half locals, and it houses shrines for all kinds of gods/dieties (I’m not sure the proper term). Sometimes, parents will come to pray that their kids do well on their college entrance exams, and so they will place a copy of their kid’s exam paper with their offerings. There are posters that inform you of whether you will experience bad luck in the coming year and it instructs you on how to best pray. Praying has been a bit commercialized as well. Essentially, people can pay for more luck and consolation, in the form of a small light that holds a person’s name is placed and lit around the temple for the new year. 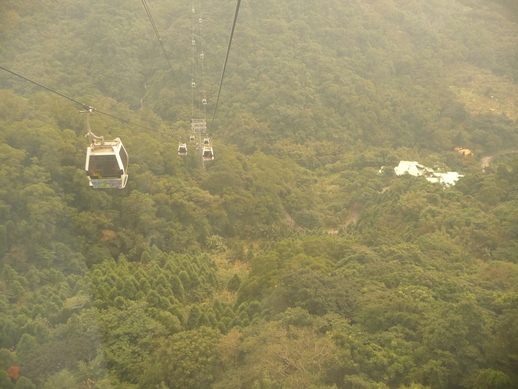 We took a gondola (cable car) ride up a few hundred meters to Maokong (貓空) into the mountains of Taiwan and saw pretty trees and things. I saw (probably) the tallest giraffe in the world, which was painted onto a smoke stack sticking out of a garbage processing facility that we could see from a distance on the gondola. Unfortunately, I can’t find the picture now, but it definitely made my day. By the way, the gondola is just a part of the metro system in Taipei. The awesome view doesn’t cost much more than a normal subway ride (about 1.3USD instead of 0.60USD).

I rode a scooter for the first time on the way to visit my paternal grandparents, my aunt, and my uncle’s dog Happy, and that was really really great. 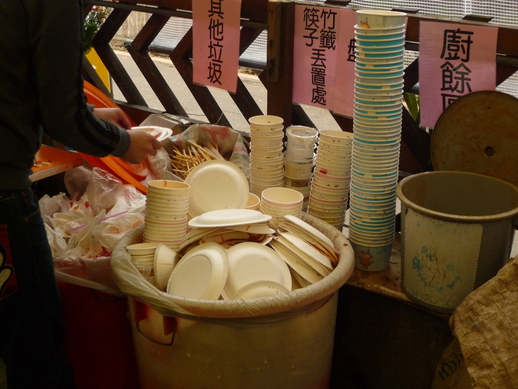 Another thing. Taiwan is crazy about recycling. They hit about 45% recycling rate in 2009, higher than the rate in the US (but I couldn’t find by how much).  Almost 100% of people sort and discard their trash properly. Beautiful. 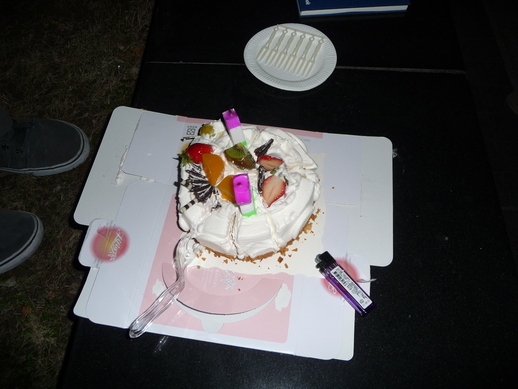 Somewhere along the way, we snuck off and got Jessica a cake because it happened to be her birthday!  Happy 21st, Jessica!!