I should probably get some rest after this blog post; we’ve got a full day ahead for our first day in Beijing. So, real quick… 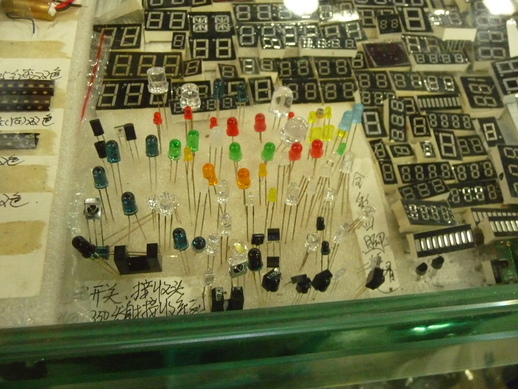 Our last plant tour was at a subsidiary of Asia Optical, where we toured molding and stamping facilities, primarily for consumer camera parts. We then spent a few hours at the Ninghe electronics market nearby. It wasn’t nearly as big as SEG, but it was sufficient for my needs. I got about 50x matching photodiode / LED pairs for ~5USD (also for the swarmbot project) and 9 USB webcams for ~33USD, roughly 4USD a piece (for a vigilance project perhaps). These might be foreigner rates, so it’s possible that I have been ripped off here, but I can’t really tell. Haggling and going around asking different vendors their prices for the same item were interesting experiences.

Then, our stay in Shenzhen came to a close and we flew to Hangzhou without a hitch. I was surprised to see that even short 1-2 hour flights serve food (as US airlines used to when I was a kid). I was also surprised to see a note left by my seat by the attendants to remind me to ask them for food because I was vaguely sleeping when they came by. Super nice! In Hangzhou, we had some traveling hitches on the way to the hotel, but eventually got there and met with OnionCapsule founder Vuvuzela + friends for a snack and a relaxing tour around.

Happy new year! We’re on our way from Shanghai to Beijing. Everyone is sleeping, and for whatever reason, I’m opting to write blog posts.

Protip: if you find yourself in a huge unfamiliar city with a population of 20 million and multiple city centers and have an engagement in an unfamiliar place about 40 minutes away, allot 3 hours to navigate there.  That’s how long it took us to get to Seeed Studio to tour their space and have lunch with their CEO Eric Pan. Seeed Studio is basically the Chinese version of Sparkfun, and they supply small quantities of electronic parts as well as kits. I had never been to a space like that before, so that was neat. Eric and Steve (Engineering lead) took us out to eat amazing Hunan food, where the restaurant was decorated super patriotic because Mao Zedong (毛泽东) was from Hunan Province. I learned the term Manong (码农), which is essentially like “code monkey” and carries negative connotations. It is also interesting that Eric suggested we meet Ben Koo, described to us as a Taiwanese guy who is advocating the maker movement in China, because I got to meet him just a few days later in Shanghai (in fact, earlier today 12/31). It seems that the maker community in China is quite well connected.

We later went to the SEG electronics market, which was several buildings full of mouth-watering electronics of all kinds. Julian proposed staying there for the entire rest of our stay in Shenzhen. Nancy walked around contemplating whether or not to buy things. I got 50x vibrating mini-motors for my swarmbot project for about 12USD (and are 4.70USD apiece on digikey), w00t. Then we rushed back to Changan for a dinner with officials from Asia Optical and my dad, welcoming us to Shenzhen.  I have to say, despite the fact that Shenzhen is a place of crude manners, everyone has been super welcoming of us. Anyway, at this dinner, we saw their customs of intense social drinking — continuous shots 37 proof alcohol for several hours.  And the night ended with a couple hours of chilling with my dad. I’m really lucky to have seen my entire family on this trip. 😀