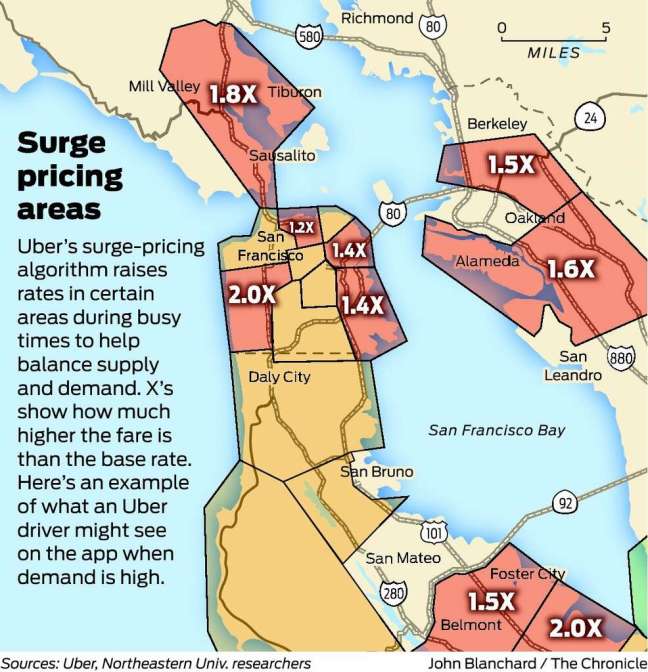 When his Uber app notifies him about a surge, a price increase in an area where rider demand is high, Sollars knows just what to do: He drives his black Ford Escape somewhere else.
“The seasoned drivers don’t pay any attention to surge,” he said. “By the time you get to that part of the city, the surge is over. Often, even when I’m sitting dead center in the middle of a surge area, I don’t get a ride request. Then, as soon as the surge is off — bam! — here comes a ride.”

Still, by quashing demand, surge ensures that passengers who are willing to pay more can get a ride quickly, achieving its basic goal. “One side is working; it definitely impacts demand, but the impact on supply is minimal,” Wilson said.

“They missed a lot of what surge does with respect to supply,” said Keith Chen, a UCLA associate economics professor currently on a two-year leave to work with Uber as its head of economic research, designing the third iteration of its surge system. During busy times, the study’s method would miss cars that “got gobbled up” by riders and instantly replaced by other cars, he said.

Idea: perhaps Uber should provide an estimated duration for the surge to its drivers.

via Report says Uber surge pricing has a twist: some drivers flee – SFGate.

Paper: Peeking Beneath the Hood of Uber, IMC 2015