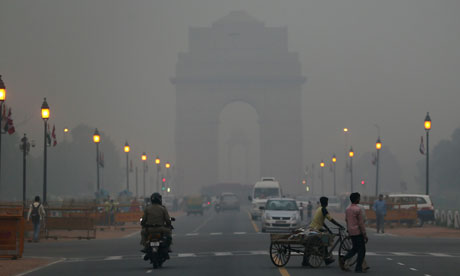 Worldwide, a record 3.2m people a year died from air pollution in 2010, compared with 800,000 in 2000. It [air pollution] now ranks for the first time in the world’s top 10 list of killer diseases, says the Global Burden of Disease (GBD) study.

via Pollution from car emissions killing millions in China and India | Environment | guardian.co.uk.

In 2010, more than 2.1m people in Asia died prematurely from air pollution, mostly from the minute particles of diesel soot and gasses emitted from cars and lorries. Other causes of air pollution include construction and industry. Of these deaths, says the study published in The Lancet, 1.2 million were in east Asia and China, and 712,000 in south Asia, including India.

If the figures for outdoor air pollution are combined with those of indoor air pollution, caused largely by people cooking indoors with wood, dirty air would now rank as the second highest killer in the world, behind only blood pressure.