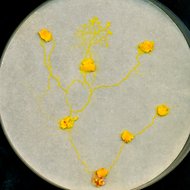 THE United States interstate highway system is often celebrated as a simple yet highly efficient transportation scheme — one that, starting in the 1950s, transformed the American economy and lifestyle. Its network of roads was designed to maximally span the country with a minimal number of links, while still allowing for enough redundancy to help drivers overcome wrong turns and missed exits.

via The Wisdom of Slime – NYTimes.com.

Transportation networks computed using living slime, modeling and affirming the development of the interstate highway system in the United States.