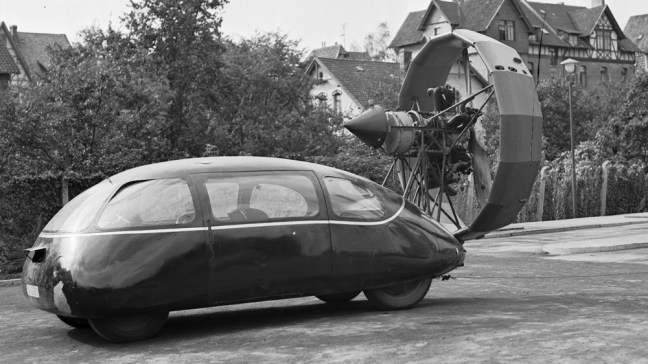 Compared to the Schlörwagen, a German experimental vehicle from 1939, the Prius is a brick. The hybrid has a drag coefficient (a measure of how efficiently it moves through air) of 0.25, which puts it ahead of the Nissan Leaf and Chevrolet Volt but behind the Tesla Model S and Mercedes-Benz CLA diesel. The Schlörwagen crushes them all, clocking in at an incredible 0.15. It also seated seven, once had a Russian aircraft engine strapped to it, and may have been stolen by the English after World War II.

While a fascinating historical relic, the Schlörwagen doesn’t have much to teach us about automotive design, Livingstone says. It was simply too singular in purpose, with little concession to the other things we want from our cars. “Clearly, modern cars must essentially embrace a form inherently less aerodynamic to afford a decent ‘package’ for the cabin space, and also deliver good visibility, crash performance and engine cooling.”

via The Bizarre German Car That Was Ultra-Aerodynamic—And Totally Impractical | Autopia | WIRED.

Sometimes, when solving a problem, it’s not so simple to optimize over one parameter and call it a day.